Roles for church women were prescribed in the 19th and early 20th centuries.
Such roles included clergy wife, Sunday school teacher, philanthropist and fundraiser.
Bazaars were very important for fundraising. 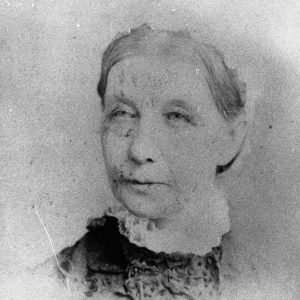 Mary Glennie (1826–1890)
The lot of a clergy wife dedicated to charitable works.

The work of clergy wives was, and is, largely unsung. A striking example of the clergy wife dedicated to charitable works is Mary Glennie. She followed her husband to the Darling Downs and then Toowong, establishing many benevolent organisations along the way including the Girls’ Friendly Society.

Archdeacon Benjamin Glennie was a significant person in the early years of the Diocese, but one who is equally important but less well known in Diocesan history is Mary Glennie, his wife. So little was known of Mary Glennie that it caused some people to ask “I didn’t even know Benjamin Glennie was married.” In her story we see what an impact Mary Glennie made in the Diocese, an indication of the strength of character of this seemingly unremarkable, quiet woman.

Mary Glennie was born in England in 1826, apparently well educated. In 1861 she came to Australia as a chaperone to her friend Kate Fowler. She lived in Warwick where she met Benjamin Glennie whom she married in 1868.

They went to Drayton Church of England Church, Darling Downs, where she shared with her husband the multifarious tasks which fell to the lot of a clergyman’s wife.

When the Glennies were transferred to Toowong Mary Glennie gave whole hearted devotion to religion and charity. She assisted in the inauguration of the Governesses’ Home and Young Women’s Institute to assist women who were forced through no fault of their own to seek employment to maintain themselves, a home which operated until 1927. She established the Girls’ Friendly Society in 1882. Mary Glennie was active in the North Brisbane Benevolent Society and St John’s Temperance Society. She was a long and active member of the Lady Bowen Hospital committee.

Mary Glennie died in 1890. The Brisbane Courier reported that her death would be felt not only by her venerable husband, but by a large number of attached friends, as well as by the poor and afflicted among whom she so long and so devotedly laboured.

The Mothers’ Union, Brisbane (1904-)
To win the homes of the nation for Christ

An enduring organisation, the Brisbane branch of Mothers’ Union was formed in 1904. Since then it has evolved from the goal of organising a band of Mothers united in prayer and seeking purity and holiness of life. Nowadays, the emphasis is still on family and is expressed through several development projects worldwide.

It is a call to every one of us to live in prayer that His help, His blessings, and His inspiration may rest upon our earnest efforts.

These are the words of Mary Sumner, the foundress (sic) of The Mothers’ Union in England, in 1876.

This was an era when the British Empire was a very strong force in the world, with widespread territories and colonies. It is not surprising that by 1892, MU arising out of the Church of England, had spread to many countries including Australia.

In 1903 the Church Chronicle described the aims of the Mothers’ Union: to uphold the sanctity of marriage; to awaken in Mothers their sense of responsibility in the training of boys and girls; and to organise in every place a band of Mothers who will unite in prayer and seek, by example, purity and holiness of life.

The first MU branch in Australia was formed in Tasmania in 1894. In Brisbane, the vision of Mrs Elizabeth Exley saw the formation of a parochial branch at Christ Church, Milton in 1904.  Mrs Exley, with the support of MU was a driving force behind the 1937 establishment of MU District Nursing Association (became St Luke’s Nursing Service in 1968).

In 1906 the Governor’s wife, Lady Chelmsford became MU President and in 1909 MU was constituted as a Diocesan organisation.

Societal changes in the 1960s and 70’s such as the use of contraception and divorce caused MU to reassess its position. Rigid membership rules were changed to include all those who have been baptised in the name of the Holy Trinity and declare their support for the Aims and Objects of the Society.

This less structured organisation commenced in 1949, to assist young women to grow in their Christian life and join MU in the future. Meetings were less formal, engendering fellowship and fun, as well as social work and Bible study. In 1983, this organisation was renamed Caritas, membership rules and age limits were removed. The organisation disbanded in 2016.

In 1974 autonomy was granted to the Australian Commonwealth Council of The Mothers’ Union, by the English Central Council. A new Royal Charter was granted by Queen Elizabeth II in which the Aim and Objectives were reworded to those in use today.

For Brisbane Diocesan MU, the most outstanding event was hosting the first World Conference to be held in Australia in 1979.  This conference marked the true nature of MU’s worldwide partnership. More recently, in 2008 Brisbane MU hosted the Special World Wide Regional Meeting in Toowoomba.

Renamed Anglican Mother’s Union of Australia in 2016, AMUA continues its focus on family life, advocating for such issues as domestic violence, child abuse, migrants and gambling. Positive parenting programs continue across Australia and around the world. During 2020-2021 AMUA is raising money to support a locally adapted Positive Parenting program in Papua New Guinea. Contributions to the Overseas Fund support many projects addressing literacy, gender equity and gender based violence. MU members in Solomon Islands are part of a taskforce to improve community-based outcomes for women in remote communities with respect to gender equity and gender justice. Each year AMUA participates in 16 Days of Action Against Gender-based violence.

In later years, AMUA has diminished slightly in numbers, with its membership representing an older age group of women and some men.