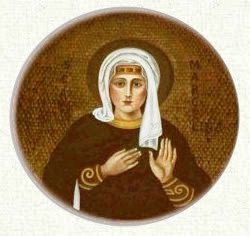 Don’t hide your talent, but like a good business person, always work with your mind, body, and a ready will to share it.

Then the Word will be near you, in your mouth and heart. The Word of the Lord is the precious talent that redeems you.
S. Ambrose

– Swithun’s instruction on his burial place outside

For the reading
And yet you ought to mourn for the world but to rejoice in the Lord, to be sad for penitence but joyful for grace, though, too, the teacher of the Gentiles by a wholesome precept has bidden to weep with them that weep, and to rejoice with them that do rejoice. But let him who desires to solve the whole difficulty of this question have recourse to the same Apostle. “Whatsoever ye do,” says he, “in word or deed, do all in the Name of our Lord Jesus Christ, giving thanks to God the Father by Him.” Let us then refer all our words and deeds to Christ, Who brought life out of death, and created light out of darkness. For as a sick body is at one time cherished by warmth, at another soothed by cool applications, and the variation of remedies, if carried out according to the direction of the physician, is healthful, but if done in opposition to his orders increases the sickness; so whatever is paid to Christ is a remedy, whatever is done by our own will is harmful.
S Ambrose – De Virginibus Ad Marcellinam Sororem Sua Libri Tres: Book III Chapter V #23b -24
http://www.ccel.org/ccel/schaff/npnf210.html She stands as pale as Parian statues stand;
Like Cleopatra when she turned at bay,
And felt her strength above the Roman sway,
And felt the aspic writhing in her hand.
Her face is steadfast toward the shadowy land,
For dim beyond it looms the light of day;
Her feet are steadfast; all the arduous way
That foot-track hath not wavered on the sand.
She stands there like a beacon thro’ the night,
A pale clear beacon where the storm-drift is;
She stands alone, a wonder deathly white;
She stands there patient, nerved with inner might,
Indomitable in her feebleness,
Her face and will athirst against the light.
(A Study (A Soul) – Christina Rossetti)

Happy are those whose transgression is forgiven,
whose sin is covered.
Happy are those to whom the LORD imputes no iniquity,
and in whose spirit there is no deceit.
Be glad in the LORD and rejoice, O righteous,
and shout for joy, all you upright in heart.

While I kept silence, my body wasted away
through my groaning all day long.
For day and night your hand was heavy upon me;
my strength was dried up as by the heat of summer.
Be glad in the LORD and rejoice, O righteous,
and shout for joy, all you upright in heart.

Then I acknowledged my sin to you,
and I did not hide my iniquity;
I said, ‘I will confess my transgressions to the LORD’,
and you forgave the guilt of my sin.
Be glad in the LORD and rejoice, O righteous,
and shout for joy, all you upright in heart.

GOSPEL (Matthew 12:1-8, NRSV)
At that time Jesus went through the cornfields on the sabbath; his disciples were hungry, and they began to pluck heads of grain and to eat. When the Pharisees saw it, they said to him, ‘Look, your disciples are doing what is not lawful to do on the sabbath.’ He said to them, ‘Have you not read what David did when he and his companions were hungry? He entered the house of God and ate the bread of the Presence, which it was not lawful for him or his companions to eat, but only for the priests. Or have you not read in the law that on the sabbath the priests in the temple break the sabbath and yet are guiltless? I tell you, something greater than the temple is here. But if you had known what this means, “I desire mercy and not sacrifice”, you would not have condemned the guiltless. For the Son of Man is lord of the sabbath.’

“One or two things we might want to note from the life of St Swithun. He was a monk in the Benedictine Community of Winchester. One of the great strengths of the Rule of St Benedict is the notion of hospitality, of welcoming the stranger in the name of Christ… His kindness is illustrated by a legend of his making whole a basket of eggs carried by a market-woman that was broken on his bridge. When crossing the bridge, she was jostled and dropped her basket of eggs.  The saint took pity on her – and made her broken eggs whole. Later legends give Swithun a reputation for compassion and evangelism, but it is his intellectual ability and learning for which hewas first remembered.

The second strand of the life of St Swithun is his concern for the poor, for the marginalised. He noticed people around him in need – the old woman whose eggs got broken, for example, or the fact that the poor of Winchester needed a bridge across the river, so that they could trade more effectively. And the third strand of Swithun’s life is his intellectual life. He was a life-long learner – one of the great themes of education in our day. How do we continue to be learners, in our Christian lives as well as in all other parts of our lives? How do we stop ourselves getting stuck intellectually and on the journey of faith?”
(A sermon preached at Godshill, Hale and Fordingbridge Churches on St Swithun’s Day, July 15th, 2018, by Canon Gary Philbrick
– https://www.avp-benefice.org.uk/st-swithun-growing-in-faith-reaching-out-to-all/)

“Marcellina was born in Trier, Gaul around the year 330 into a Roman Christian family. Her father served as Praetorian prefect of Gaul. The sister of Ambrose of Milan, she was older than her two brothers. About the year 354 Ambrosius, the father, died, whereupon the family moved to Rome. It appears that after the death of their parents, she took responsibility for the upbringing of her younger brothers, Ambrose and Satyrus. As the eldest sister in her family, she made it a point to pass her younger brothers the “desire not to express their virtue, but to become truly virtuous.” She devoted herself to the practice of piety and asceticism, and received the veil of consecrated virginity from Pope Liberius. This life she led called for continual abstinence, dedication to prayer, strict fasting, etc. The life chosen by Saint Marcellina was one of great sacrifice.”
(https://www.catholic.org/saints/saint.php?saint_id=302)

(Collect for A Monastic or Ascetic – APBA p 641)
O GOD, whose blessed Son became poor so that we through his poverty might become rich: deliver us from an inordinate love of this world, so that, inspired by the devotion of your servants Marcellina & Swithun, we may serve you with singleness of heart, and attain to the riches of the age to come; through Jesus Christ our Lord, who lives and reigns with you, in the unity of the Holy Spirit, one GOD, now and for ever. AMEN

Today’s “Cathedral Compassion”: All involved in the performing arts/ For those whose work is stressful or unfulfilling

Outreach Through Offerings: The Stepping Stone Clubhouse, Coorparoo – providing meaning, purpose, and hope for people with a mental illness.

Rest Eternal grant to them, O GOD,
And may Your light perpetual shine upon them

When Winchester races first took their beginning
It is said the good people forgot their old Saint
Not applying at all for the leave of Saint Swithin
And that William of Wykeham’s approval was faint.

The races however were fixed and determined
The company came and the Weather was charming
The Lords and the Ladies were satine’d and ermined
And nobody saw any future alarming.–

But when the old Saint was informed of these doings
He made but one Spring from his Shrine to the Roof
Of the Palace which now lies so sadly in ruins
And then he addressed them all standing aloof.

‘Oh! subjects rebellious! Oh Venta depraved
When once we are buried you think we are gone
But behold me immortal! By vice you’re enslaved
You have sinned and must suffer, ten farther he said

These races and revels and dissolute measures
With which you’re debasing a neighbouring Plain
Let them stand–You shall meet with your curse in your pleasures
Set off for your course, I’ll pursue with my rain.

Ye cannot but know my command o’er July
Henceforward I’ll triumph in shewing my powers
Shift your race as you will it shall never be dry
The curse upon Venta is July in showers–‘. FOR THE GRACE
May GOD bless us and keep us,
May GOD’s face be made to shine upon us and be gracious unto us,
May GOD’s countenance be lifted up upon us, and give us peace
this day and forever more. AMEN.