Click on the front cover image below to open the online, interactive FlippingBook version of St John’s Cathedral and the Anzac Legend.

(Note that this will open a new browser window to the Cloud account hosted by the book’s designers: Masthead Design & Creative.) The FlippingBook version is fully searchable, and includes many useful internal navigation options, such as a clickable Table of Contents and image captions, buttons to take you direct to selected sections of the book and many useful cross-references – including from the Index entries at the end.

Among the many other features, the thumbnail Cathedral floorplan at the start of each section features a clickable pop-up image of the relevant item’s location in the Cathedral for easier orientation.

The special online edition is a rich trove of multimedia links to a fascinating array of videos, informative websites and documents which help bring life to the many stories behind the Anzac Legend and the artefacts entrusted to our Cathedral over the past 100 years.

There is much more, besides, in this special edition – and please read the opening ‘Preface to the online edition’ in the FlippingBook for more information. We trust you will enjoy your journeys of discovery!

Thanks to the support of the Queensland Government, together with the resources of the State Library of Queensland and the Australian War Memorial in Canberra, this comprehensive guide to some of the range of priceless artefacts which have been entrusted to our safekeeping in memory of ‘the Anzac Legend’ and the sacrifices made by ordinary Australians throughout the past 100 years was officially launched – in both print and digital formats – by the Governor of Queensland, His Excellency the Honourable Paul de Jersey AC, on Wednesday 19th December 2018.

Click on the thumbnail preview below to view an interactive online orientation to the various memorials located in the Cathedral – or download the one-page A4 PDF (620kb) as a printable guide. 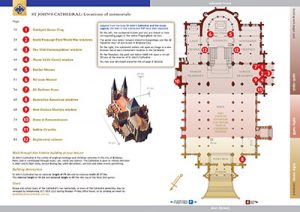 In the modules below you will find download links for each section of the book, with the complete 104pp file at the end. For legal and copyright reasons, we are required to have the book’s cover image and Impressum page included in each section’s PDF file and we ask that you kindly respect the provisions noted in the latter.

Should you wish to make use of any of the materials for educational or non-commercial reasons, please acknowledge in accordance with the CC License on the Impressum page. For commercial or other reproduction, please first contact the Cathedral by email or by telephone on +61(0)7 3835 2222 during Monday-Friday office hours. (Note: requests to reproduce Australian War Memorial images must be directed to the AWM in the first instance.)

Download the complete book PDF file here – 104pp / 100.5MB
Please note that these PDFs may not contain the full suite of active hyperlinks and interactive resources found in the online FlippingBook version. The complete book PDF link may not display in preview but may still be downloaded if desired.

St John’s contains one of Queensland’s more notable collections of memorials to the First and Second World Wars and other conflicts in which the Australian Defence Force has been engaged. The book was created principally for Queensland secondary school students as well as for a wider readership.

The book was written by Cathedral parishioner and historian Denzil Scrivens, as a labour of love. In researching the history of the Cathedral building itself in 2016, Denzil discovered an old newspaper article that solved the mystery of the ANZAC-emblazoned flag hanging in the South Transept. Over the years the story of the flag had been lost, and the article revealed that the flag was the very last flag flown at the evacuation of the Anzacs from Gallipoli on 19th December 1915. This marks St John’s Gallipoli flag as a war relic of national significance.

The flag had been carried at Anzac Cove, under enemy fire, on the last day of the evacuation by an army padre from Brisbane, the Rev’d Alexander Maxwell, who gifted it to the Cathedral in a ceremony on Anzac Day, 1929. Inspired, Denzil began to research the history of the other memorials installed in the Cathedral. He has created a book that speaks not only to the memorials, but to the stories behind them and testimonials to the meaning and cost of war.

Beautifully designed, and illustrated with photographs from the Australian War Memorial, the Imperial War Museum London, and from local photographers including Aimee Catt, the book’s canvas includes memorials which commemorate, among others:
• the Anzac campaigns at Gallipoli, Palestine and the Western Front during the First World War;
• the Battles of Britain and El Alamein, and the gruelling campaign in Papua and New Guinea, during the Second World War;
• the peacetime HMAS Voyager disaster of 1964;
• the Vietnam War;
• the Cathedral’s regimental Colours including those of 9 RQR and 6 RAR.

The experience of civilians in war is also recognised, particularly that of nurses in the First World War and women on the home front in Brisbane during the Second World War. To be able to launch the book on 19th December 2018, 103 years to the day since the Gallipoli evacuation, and the day the Cathedral’s Gallipoli flag was last flown in that theatre, is especially poignant.